Are you looking for a furry friend to add to your family? How about a furball that’s sure to keep your entire family safe? Perhaps you’re just looking for a new buddy to keep you company throughout your day. In any of these situations, plus nearly any other you can think of, a German Shepherd is a perfect solution.

This noble breed has set the standard when it comes to loyalty, the willingness to protect and remarkable intelligence. The amount of love they have to offer is limitless and they will stop at nothing to impress their humans. For these reasons, plus many more, German Shepherds are extremely popular.

Welcoming a German Shepherd into your home and your family is a decision that you won’t regret, but before adopting your new friend, there are some things you need to be aware of. 1. German Shepherds Have Large Ears
2. They’re Very Protective
3. They Love To Be Vocal
4. Cuddles Are Normal
5. German Shepherds Pick Up On Emotions
6. Pups Can Be Clumsy
7. Cost Should Be Considered
8. Watch Out For Hip Dysplasia
9. You’ll Need To Brush Them Daily
10. Experience And German Shepherds You’ve probably seen pictures of a German Shepherd. Perhaps you’ve seen a few on TV. Maybe you’ve even met a few in person. There’s one thing you probably noticed. They all have rather large ears. Their large ears give them an advantage when it comes to hearing, but their size also creates the need for regular cleaning. German Shepherds are undoubtedly one of the most protective and loyal breeds you’ll ever come across. They’re extremely dedicated to their families and will stop at nothing to ensure that everyone is safe. Believe it or not, German Shepherds will stand by your side even in times of danger. They’re not in the business of tucking and running. Rather, they’ll literally put their life on the line for you.

3. They Love To Be Vocal While it may not be the case for every single dog in this breed, German Shepherds are known for being very vocal. Moaning, groaning and barking will become a normal part of your life. Some people may misconceive the barking as an aggressive act, but more often than not, it’s just their way of striking up a conversation. This may not be the best breed for you if you’re the type of person that enjoys peace and quiet. Even though German Shepherds can grow to be very large, they still love to cuddle. Get used to the idea of something pushing 90-100 pounds trying to snuggle up with you whenever possible. Some people recommend training them to stay off of furniture simply because most dogs become large enough to take up an entire bed or couch. However, the choice is yours. A lot of people love the idea of sharing their space with their furry BFF.

5. German Shepherds Pick Up On Emotions Most breeds of dogs are able to pick up on human emotions. However, German Shepherds seem to have mastered this incredible ability. It’s likely due to their sharp intelligence. They’ll know when you’re happy, and they’ll do whatever they can to cheer you up when you’re sad. This is just another reason why this breed makes the perfect addition to any family.

6. Pups Can Be Clumsy 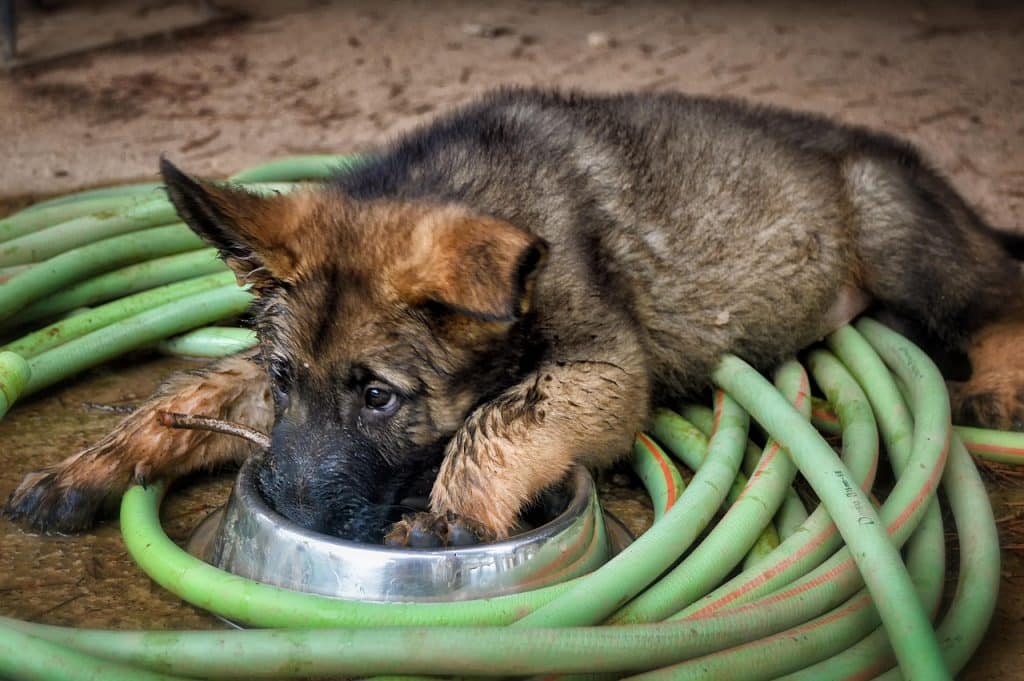 Shepherds grow extremely fast. Their size often explodes within the first few months of their lives. Their quick growth leaves them a little out of touch with themselves for a while. It can be rather cute watching a large and clumsy dog roam through your house, but their size and lack of awareness of their body can lead to something getting broken. Make sure you keep fragile objects out of reach for at least the first year.

7. Cost Should Be Considered Adopting a dog can get a little costly. Your new friend will need a bed, toys, a leash and harness, possibly a crate as well as a lot of food. Being such a large breed, German Shepherds eat quite a bit on a daily basis. When considering the fact that a bag of food ranges between $30-$60, it becomes clear that you’ll soon be spending large amounts of cash of your buddy’s favorite kibble.

8. Watch Out For Hip Dysplasia Unfortunately, older German Shepherds have a tendency to develop issues with their joints. Hip dysplasia is another real concern in their later years. This has nothing to do with their breed or bad genes. It simply comes down to the fact that they are large dogs. All of that weight takes a toll after a while. The good news is that medical technology for dogs has advanced a great deal. There are now many different treatments a vet can use to help your BFF live a long and comfortable life. The best approach is to be preventative. Make sure you take your buddy to regular checkups at the vet.

9. You’ll Need To Brush Them Daily This breed has a beautiful coat. They also tend to shed a lot. All of that hair has to go somewhere and if you don’t brush them daily, it will be all over your floor and furniture. Avoiding a mess isn’t the only reason daily brushing is a must. With so much fur, it can be easy for their coat to become tangled. If you don’t untangle their fur it can begin to become matted. While anything is possible, this may not be the best breed for a person with little to no experience with dogs. They’re amazing but they require time, attention and patience. Since they are incredibly intelligent it is also important for you to keep them engaged. Training is an absolute must as well. Keep in mind, German Shepherds are eager to please and you need to teach them what acceptable behavior is compared to what’s not. All of these things combined can become a handful. Just make sure you know what you’re in for before signing any papers.

Now that you know a little bit about German Shepherds, do you think they would be a good fit for your family? It’s also important to ask yourself if you will be a good fit for them because that is something that goes both ways.

Remember, adopting a dog is a big choice. It’s not something you should rush into. However, if you’ve thought it over well and are ready to welcome a furry friend into your family, you really can’t go wrong with a German Shepherd.

What should I look for when adopting a German shepherd?

Some of the important things you should pay attention to are the dog’s size and whether you will have room for them, energy level, temperament, if there are any visible health issues, and most importantly whether you will be able to form a bond with your new furry friend.

What is the best age to adopt a German shepherd?

Ideally, the best time to adopt a German Shepherd is when they are eight weeks old. However, there’s no reason that an older GSD should be ruled out. German Shepherds are incredibly loving and intelligent dogs that often do well with adapting to new surroundings, even at a later age.

Is it safe to adopt a German shepherd?

In most cases, there’s nothing to worry about when adopting a German Shepherd. In fact, they are a very loyal breed that often forms a deep bond with their human. However, some shelter dogs have had a rough past and some have even been abused. In these situations, aggression does become a possible concern.

Will my German Shepherd protect me without training?

German Shepherds have a strong pack instinct so in most cases, they will naturally protect their owner. Often, their size alone is enough of a deterrent to ward off intruders.

Which is better male or female German shepherd?

If you have kids at home or are looking for a dog that’s easy to train, a female would likely be your best choice. Female German Shepherds tend to train easier, are more obedient, and are better around children. However, males have plenty to offer as well.

Absolutely, as long as the dog receives proper training and socialization. It’s not uncommon for German Shepherds to quickly form deep bonds with their new family. They love to please their humans and their high level of intelligence allows them to pick new things up rapidly.

How big do German shepherds get?

How long do German shepherds live?

The average life expectance of a German Shepherd is between 9-13 years. Some may go on to live even longer than that with daily exercise and regular checkups at the vet. The best way to ensure that your fur baby lives a long and healthy life is to keep them mentally and physically engaged.

Are German shepherds expensive to own?

You can typically expect to spend an average of $85 per month on basic necessities for your GSD. Over the lifespan of your furry friend, you can expect to spend upwards of $12,000. Keep in mind, these costs do not include vet visits or grooming. Owning a German Shepherd can be a bit pricey, but they more than make up for that with their awesomeness.

How long does it take to train a German shepherd?

The time it takes to train these majestic dogs really depends on how much time and effort an owner is willing to put into the process. With a strong commitment, a German Shepherd can usually be trained basic commands in as little as 8-12 weeks.