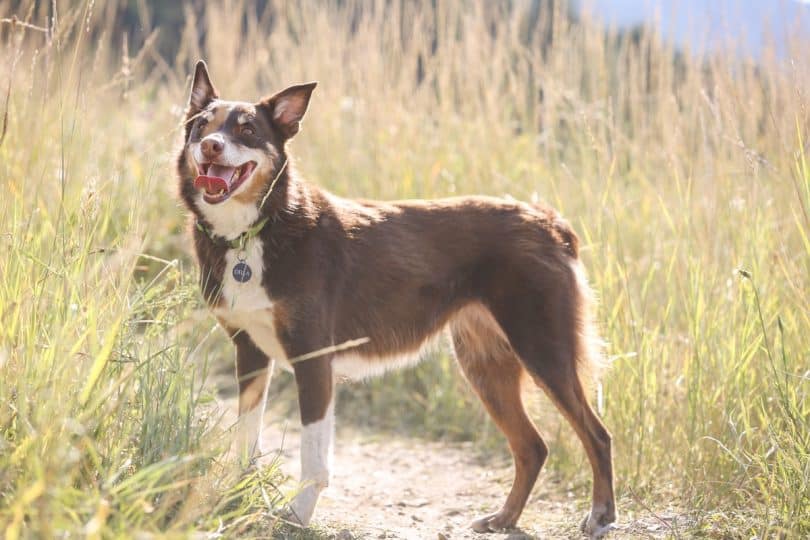 We had the pleasure of meeting up with Sadie Mae from the Teton County Animal Shelter, her long term foster Joseph Larrow, dog trainer Eva Perrigo and photographer Jay Nel-McIntosh for a sunny afternoon photoshoot to highlight this incredible pup. Sadie Mae is in need of a loving forever home and we would love to help her find the perfect person to hire. If you are interested in adopting Sadie Mae, please contact the Teton County Animal Shelter at (307) 733-2139. Sadie Mae is in a long term foster home with Joseph Larrow and his wife Kathrin so we asked Joseph a few questions to see what it is like to open your home to a foster animal as well as the process it takes to have these animals let down their guards and learn to trust and love again. 1. How long have you fostered Sadie Mae for?

I took Sadie home about the First of January. I was volunteering last Fall at the town shelter by working with some of the more rowdy and troubled dogs. I would take them on hikes and off-trail walks in the Snake River Range or up the butte behind the shelter. The first dog I worked with was a very sweet pit named Hunter who was quite lovable and yet had issues with some other dogs. Once he was adopted I moved on to Domino another Pit and took Sadie at the same time. It is amazing how wilderness style walks both on trail and off trial the exploration of new terrain, scouting high ridge tops, swimming beaver ponds and playing in creek bottoms help the dogs bond and learn to trust one another. Luckily I have my two dogs to assist with this, one is actually Kathrin’s and she was found on the Reservation near Riverton and I have mine named Clark. Clark was in the Logan Pound for two years and had severe aggressive tendencies with other dogs.  However in just several months time Clark made quite a transformation and now, for some reason both Ruby and Clark are quite comfortable with our wacky shelter dogs and give them all the tolerance that is needed.. It is almost as if they are going, Oh no, who do we have to put up with this time. Perhaps some of what helps it is that I let the new dogs know in no uncertain terms that fighting is not allowed, ever. Once they get that message then we can move right along to just having an exciting day, afternoon or evening outside, all together. 2. Did you approach the Teton County Animal Shelter looking for a pup to foster or did they reach out to you?

I reached out to Janelle at the shelter about taking Sadie home overnight and long term. Prior to this the shelter was hobbled in just letting the dogs go with me off campus for hikes or longer forays was problematic and fraught with red tape. 3. What was Sadie Mae like before you took her home to foster?

Sadie was a good candidate for fostering because she would bark incessantly all day long and drive the other dogs nuts. She had an amazing propensity for doing so and often had to be quarantined to the North side of the shelter in the outside kennels by herself standing alone in the cold shade on the cement floors.  She was just too smart and too full of anxiety to exist there. The staff loved her yet she was a square peg in a round hole. She was quite skinny at that time, her hair was more akin to frayed guitar strings from the stress and you could just see how difficult kennel life can be on some animals. I took her home for a little bit on weekends and the staff would tell me that she would not eat for a couple of days when I brought her back. I am really grateful to Janelle for taking a risk and letting me take her overnight. Finally about the first of the year I went up on a weekend and the cleaning person had put Sadie outside by herself on an early, frozen, Sunday morning –  again in the ice cold kennel on the north side of the building at four degrees Fahrenheit with no coat on. I cried just seeing her standing there barking at no one or thing, just lost with no one in the world to interact with and I vowed to take her home and never allow her to go back. So home she came, Sonja from the animal shelter gave her a beautiful hand quilted dog bed as a sendoff that a quilting circle donates to the shelter and she blended in from the beginning at our home. Awkward at first as one might expect  in adjusting  to her new surroundings. I think she was mystified by the quiet, the warmth of the wood stove, a more varied diet and having full run of the house with a new family. Some major things like the aggressiveness  that she would show toward other dogs, food guarding and some of the traits that materialize in confined spaces were surprisingly never an issue and she pretty much to this day is an independent character amongst us. 4. How has she adapted to your home and environment since first bringing her home?

In the beginning I couldn’t trust her around other dogs and would not even leave mine in the car with her. Outside of the shelter gals she would trust no one especially in the car or public.  The mere thought of someone petting her for me was wrenched in the fear of her lashing out and biting them on their hand.  She was extremely wary of touch and was quite head shy. There was also the concern that she would have some wide eyed defensive barking and growling episode when in a group of people and would be tagged as a public threat. At any time in a public space she would be okay for a few minutes and then she would become very agitated and it was time to get her out of there. Luckily though I have a very good friend who is amazing with animals and she would insist I bring Sadie inside the airport where I work when the flights landed. This conditioned her to be in a large setting of people where everyone was concentrating on finding their luggage and hence she could be in a busy quagmire without being overwhelmed. 5. How has your foster experience gone so far?

Since then Sadie has become more and more comfortable in our home and with friends and public. She now initiates greeting people on her own and is quite friendly.  She will be bark loudly when people approach the house or come near the car yet you can also see her tail wagging. Friends can ride in the car with impunity and on our Snow King climbs she is quite indifferent to others, always soliciting a quick pet and is wonderfully unconcerned with other dogs. Even better she ignores children and will walk away if approached . 6. Would you consider fostering another pup in the future?

I would foster another dog preferring one that had behavioral issues. It would have to be shorter term since my wife is a Vet and not at all okay with having three dogs.  She works hard with animals all day and coming home to my two goofs and then her dog Ruby is a bit much with loud baking and a need try and knock her over at the door from excitement. 7. Would you ever consider keeping Sadie Mae for yourself?

Certainly I would love to keep Sadie for myself, in an instant, I would never want to give her up yet I have to respect Kathrin’s feelings and it is true, three dogs are a lot more than two and quite a bit more expensive medically and for pet care when out of town. 8. If someone wanted to adopt Sadie Mae what would you tell them to consider first?

For anyone that did want to adopt Sadie I would ask them to consider a few things. Primarily the amount of exercise and focus that she demands. By focus I mean she is hyper alert to any noise, person, UPS truck and will respond with loud barking. I do have a very non invasive painless method of curing this and if someone can get comfortable with the first two issues then I think any other quirks would not seem to be a problem. She is quite smart, loves to throw her food bowl in the air in the morning until she is fed and if I tell her she is staying home when I go out she simple turns around and walks back into the bedroom.